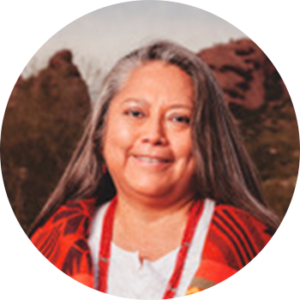 Belinda Eriacho, MPH
Belinda is of Dine’ (Navajo) and A:shiwi (Pueblo of Zuni) descent. She is the founder of Kaalogii, which focuses on cultural and traditional teaching and inner healing.She holds degrees in Health Sciences, Technology, and Occupational and Environmental Health.

To provide guidance for organizations, conference organizers, and sponsors on the inclusion of Indigenous people and communities into psychedelic science events, such as conferences, webinar series, workshops, and other formats.

Partnering with Indigenous communities or individuals takes some cultural humility and competence.

As you create your events, you may be inclined to invite Indigenous people to provide a unique perspective on a specific topic. Partnering with Indigenous communities or individuals takes some cultural humility and competence. This means that the organizers should come with good intentions of honoring indigenous people’s beliefs, customs, and values. It also means acknowledging their differences and accepting them for who they are.

Cultural humility is fundamentally about meeting someone where they are at. It requires an ongoing process of self-exploration and self-critique. An openness and willingness to learn from others and listening to understand is key to the success of this relationship. Building a relationship with Indigenous people is not about moving your personal agenda forward. They are not there to fulfill your desire for representation. Rather, it is about working in collaboration for the betterment of all.

From a Western view, “indigenous” is synonymous with “aboriginal” and “native.” Indigenous communities, peoples, and nations are those that have a historical continuity with pre-invasion and pre-colonial societies.

In the United States, different terms are used to refer to the indigenous people that reside here. These terms are “American Indian,” “Native American,” and “Indian.” A further explanation of each of these terms can help organizers properly address these individuals and community in a respectful manner.

The term “American Indian” excludes Native Hawaiians and some Alaskan Native people. “Native American,” as a general principle, is a person who has some degree of Indian blood and is recognized as an Indian by a tribe, village, or the United States. There exists no universally accepted rule for establishing a person’s identity as an Indian (Native American Rights Fund, n.d.) The term “Indian” has a negative connotation to Indigenous people of North American and is a reminder of the term used by Columbus when he arrived to begin the colonization of the Americas.

The general consensus of members of the Native American tribes in the United States is that they prefer to be referred to by their tribal affiliation in their native language. For example, Diné or Dineh versus Navajo. As of June 6, 2020, there are 573 federally-recognized tribes in the United States, and each is distinct with their own culture and languages (Native American Rights Fund, n.d.). For many Native American tribes, these names were given to them by those who conquered them or by the US federal government.

Why is Inclusion Important?

Incorporating traditional indigenous knowledge into the discussion allows for a wider understanding of the plants and their environment.

Here are some points to keep in mind as you create your event and build a relationship with Indigenous people:

Take into account that values you consider core to your beliefs, such as “universal rights,” gender roles, or others may not resonate with your indigenous speaker or are not a part of their world dynamics.

Be aware that there are individuals who may claim some kind of indigenous heritage or consider themselves as indigenous and, yet, they may not be recognized as such by that community.

Below are some resources that you may find used in doing your research:

The author wishes to thank Bia Labate for the original idea of this paper and comments to this version. She also would like to thank Diana Negrín, Emily Sinclair, Celina De Leon and Troy Puha for their comments to the original version of this paper. In addition, the author also acknowledges and appreciates Chacruna’s leadership in creating inclusion and diversity in the field of psychedelic science.