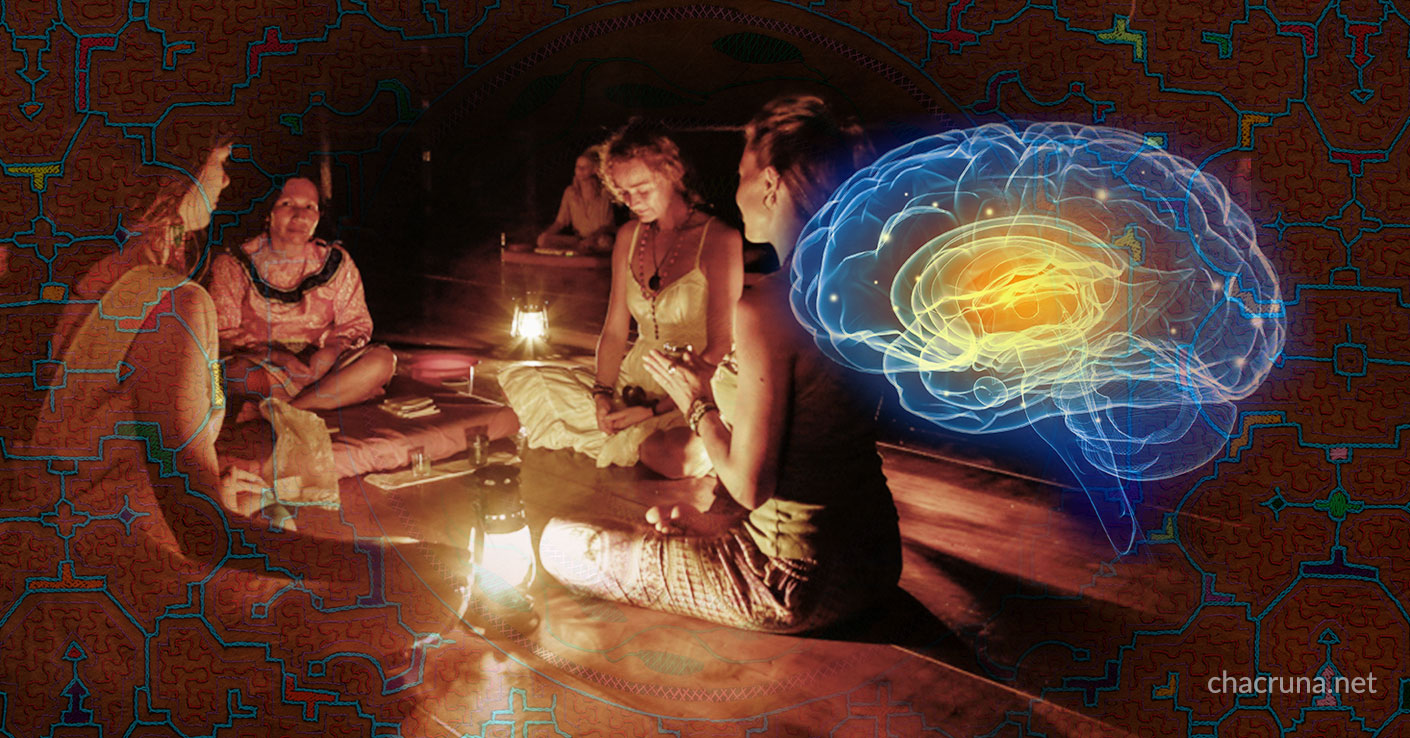 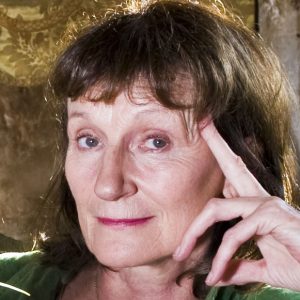 Ayahuasca ceremonies have been recognized as both religious and therapeutic experiences by their practitioners for millennia. Today, research with this extraordinary visionary brew from the Amazon is beginning to uncover how this traditional plant medicine may be incorporated into modern medicine, facilitating the meeting of two distinct cultural modes of healing.

For several years, I have been working with the pharmacologist Dr. Jordi Riba to investigate ayahuasca’s curative potential. Using a variety of methods, including modern brain imaging technology, we are finding that ayahuasca produces changes in brain activity that can be linked to a weakened grip of the ego over the rest of the mind. Regular ayahuasca use induces changes in personality traits, and, intriguingly, seems to create changes to the brain structure itself. Importantly, these changes are linked to better mental health.

In collaboration with ICEERS, we are researching the long-term effects of ayahuasca use on individuals’ personal development, spiritual growth, and mental health. We have produced some remarkable early results: Across the board, we saw reductions in pathological symptoms in patients suffering from depression, grief, anxiety, and post-traumatic stress disorder (PTSD) following a two-week ayahuasca retreat.1 This research enables us to study the multiple ways in which the mind’s healing capacities can be activated, and help psychiatric practitioners lead their patients down alternative paths towards healing, including those first traveled by the ayahuasca curanderos of the Amazon.

The therapeutic value of ayahuasca is currently championed by those relatively few communities that are familiar with it. However, we hope that soon, with continued and expanded research, we can help evolve a new approach to psychiatry that will revolutionize not only how we treat, but also how we understand, psychological disorders. 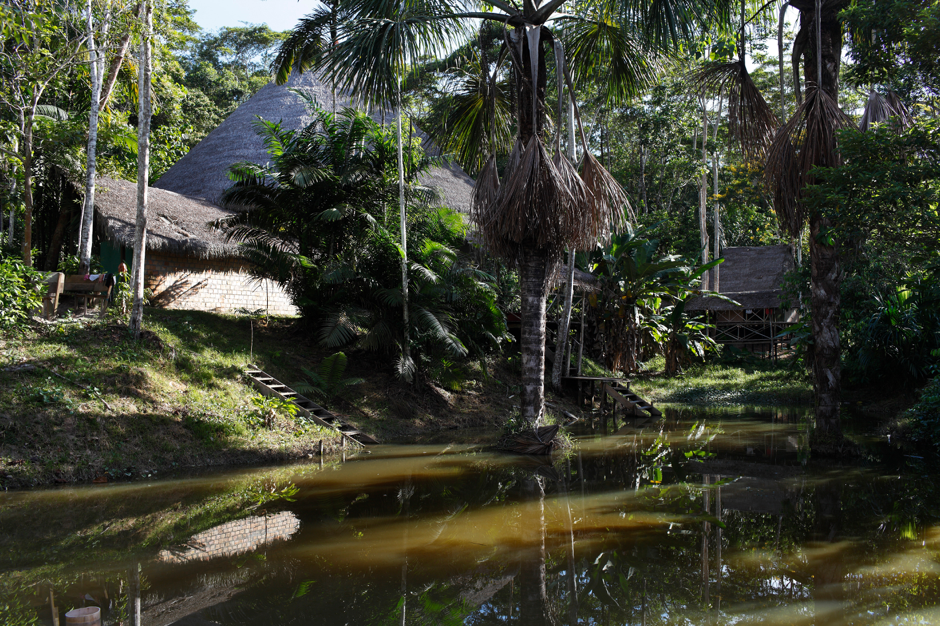 In another study of the Beckley/Sant Pau Program, led by Jordi Riba, we have shown that ayahuasca’s therapeutic power has many similarities to that of another age-old therapeutic practice: meditation. Regular meditators cultivate a mental ability called “decentering”: recognizing that your own thoughts and feelings are separate from yourself which, in turn, allows you to be both less judgmental and less reactive towards them. We discovered that ayahuasca drinkers’ ability to “decenter” is increased for up to 24 hours after ingestion; they showed a greater acceptance of mental experiences, less “inner reactivity,” and an increase in the ability to take a detached view of their thoughts and emotions.2

Enhancing these skills is the goal of mindfulness-therapy, an increasingly popular therapy for those suffering from conditions such as depression, addiction, obsessive-compulsive disorder (OCD), and eating disorders.3 The ability to decenter, whether natural or fostered by meditation, has been strongly linked to a reduced risk of mental illnesses.4 In our study, participants’ scores after a single dose of ayahuasca were similar to those of experienced meditators with many years of training.

Decentering has an important role in various therapies, including systematic desensitization [SD], used to treat PTSD and phobias. In SD, patients are exposed to a “trigger” for their stressful or phobic responses in a progressive and controlled way, while using decentering techniques to help them control their response. At first, this exposure is just a visualization of their trigger, but, in time, the stress response can be reduced or removed even in the presence of the real trigger. Ayahuasca, by promoting vivid and emotional memories, may naturally provide a safe and imaginary context in which to explore these triggering experiences, while practicing the decentering that allows them to remain one step removed from the unpleasant emotional impact.5 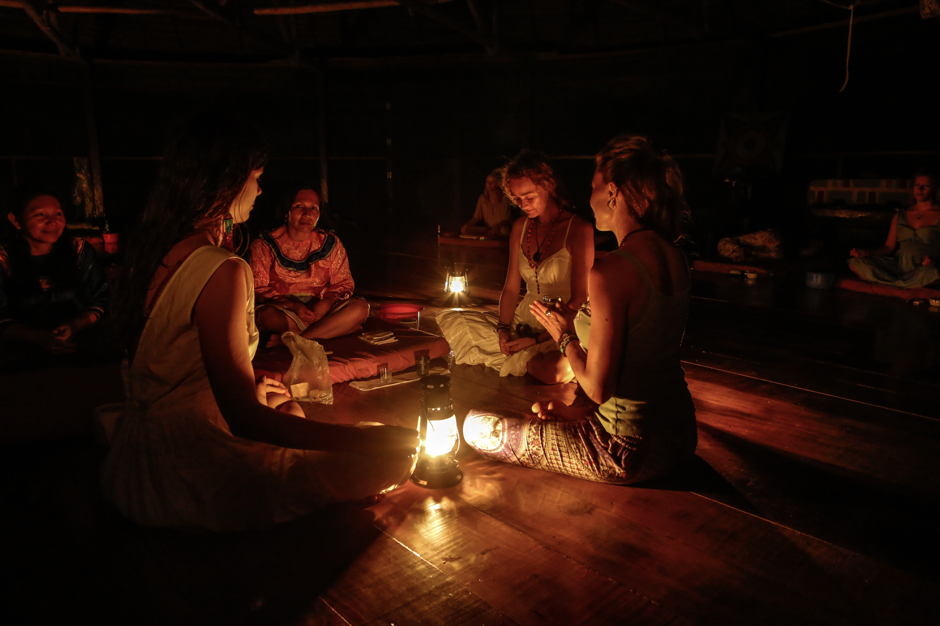 Ayahuasca ceremonies can have similar psychological effects as meditation. (Photo courtesy of the Temple of the Way of Light.)

Ayahuasca’s benefits can also extend into the long term. We showed that regular ayahuasca  drinking leads to personality changes that can promote mental health. One of these changes is that people became more open to experience. Openness is a well-established personality trait that research has shown is linked to happiness and higher quality of life.6

Regular ayahuasca-drinking also seems to boost optimism. There is plenty of evidence that links optimism to well-being: it is associated with lower risk of depression and anxiety and higher life-satisfaction. It’s also linked, interestingly, to both psychological and physical well-being, probably because optimistic people have also been found to live more healthily.7

However, one of the most significant long-term changes we found was not through questionnaires, but through scanning the brain itself. Recent studies, conducted as part of the Beckley/Sant Pau Program, have revealed shrinking in a brain region called the posterior cingulate cortex (PCC) among regular ayahuasca drinkers. The PCC is part of the brain’s Default Mode Network (DMN), which is a collection of brain regions involved in processing various aspects of selfhood, such as autobiographical memories and self-awareness.8

The integrity of the DMN is important in maintaining the sense of ego and self-control. Research undertaken as part of the Beckley/Imperial Program has shown that LSD decreases connectivity between key regions of the DMN, leading to a sensation of ego-dissolution, while greatly increasing connectivity between areas in the rest of the brain.9 Similarly, in the case of ayahuasca drinkers, the long-term shrinking of the posterior cingulate cortex (PCC) was found to correlate with increases in mindfulness-related traits, such as self-transcendence and transpersonal feelings.10  An increase in thickness was also observed in the medial frontal lobe, specifically in the anterior cingulate cortex, which plays a role in some higher-level functions such as reward anticipation, decision-making, impulse control, and emotion. 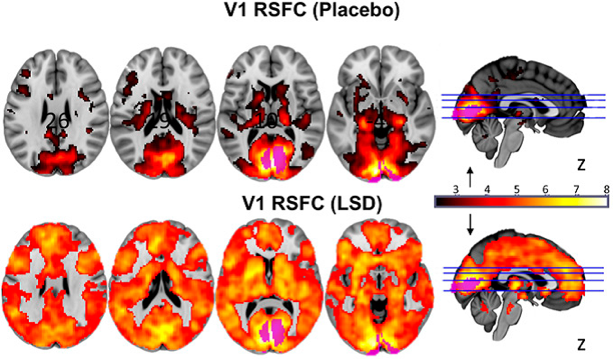 LSD increases the connectivity between the human visual cortex and the rest of the brain.

In a separate study at Sant Pau, we used electro-encephalography (EEG) to measure the brainwaves of people under the effects of ayahuasca, and found a reduction in a particular frequency known as “alpha waves.” Interestingly, thoughts related to “self” have been associated with enhanced alpha activity in the posterior cingulate cortex (a major structure of the DMN); therefore, brain waves of this frequency seem to strongly contribute to the control of the ego over consciousness. Compounds like ayahuasca interrupt the ego’s rhythm, diminish its control, and allow more spontaneous response to the processing of incoming sensory information.11

This discovery might strike a chord with practitioners of mindfulness, where an unguided and non-judgmental awareness of the present moment is encouraged. In fact, brain-scanning has shown that meditators and ayahuasca-drinkers exhibit a similar reduction in alpha-waves. This reduction of alpha waves might also explain how decentering is experienced during the ayahuasca or meditation experience, and how the effect seems to linger after the experience is over. The ego’s usual filtering grip on sensory input is reduced, and so sensory input is experienced more immediately, in a non-judgmental and non-reactive way.

Additionally, as part of the studies at Sant Pau, we have investigated how two of the active substances in ayahuasca affect neurons directly, by observing them under a microscope. Surprisingly, these substances were able to stimulate a dramatic creation of new neurons, a process known as neurogenesis.12  If this same effect occurs in our brains when we drink ayahuasca, it could further explain its restorative power. Reduced neurogenesis has been linked to higher stress levels, depression, and schizophrenia; it also happens naturally in old age, which may be a factor in Alzheimer’s and Parkinson’s diseases. 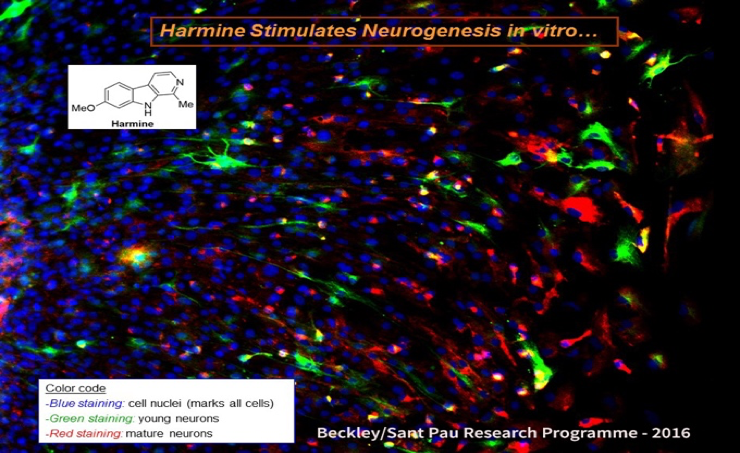 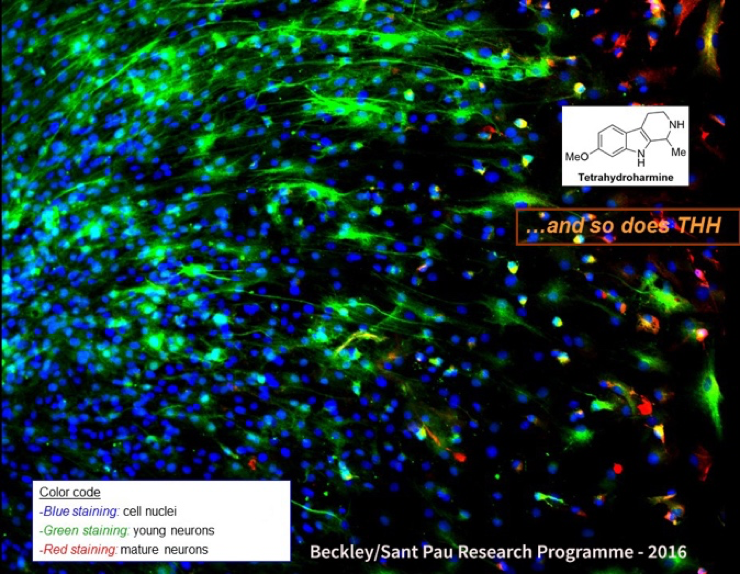 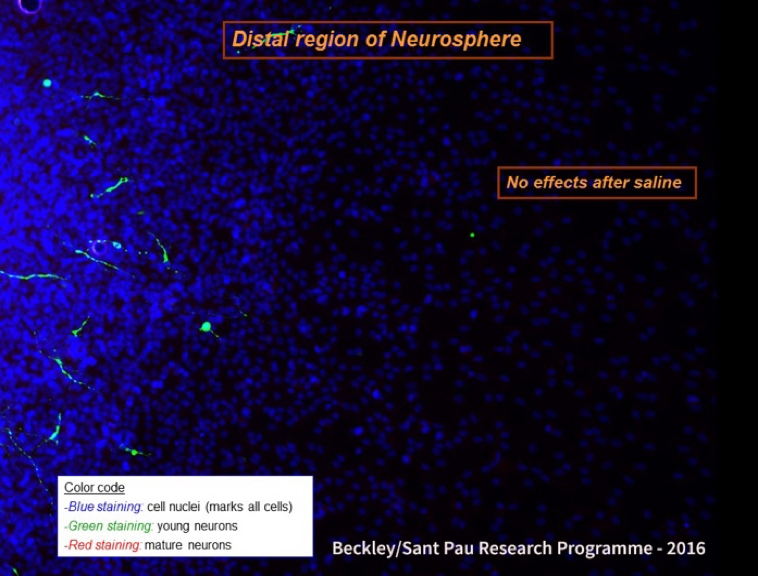 Two different compounds, harmine and tetrahydroharmine (first and second image), were shown to encourage the birth of many more new cells (shown in green and red) than were created under natural conditions (third image). Courtesy of the Beckley/Sant Pau Research Program.

By investigating the short- and long-term effects of ayahuasca, combined with brain-imaging technology, we hoped to reveal the basis of its therapeutic potential. We are pleased to have found that it produces such remarkable changes in the brain, and that its therapeutic effects, such as decentering, are not only powerful during the experience, but persist after the experience is over. While these findings help to advance our understanding of the benefits of ayahuasca as a treatment for psychiatric disorders, they also illuminate the path towards a new scientific synthesis that reconciles traditional healing with contemporary medicine.

The parallel knowledge of contemporary scientists and indigenous healers will converge in Oakland this April, where several of the Beckley Foundation’s research projects will be presented at Psychedelic Science 2017. We hope that one day the medical insights from the traditional Amazonian societies will help bring relief to innumerable people worldwide. 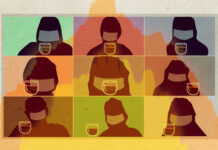 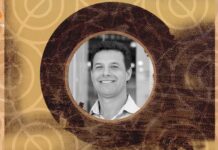