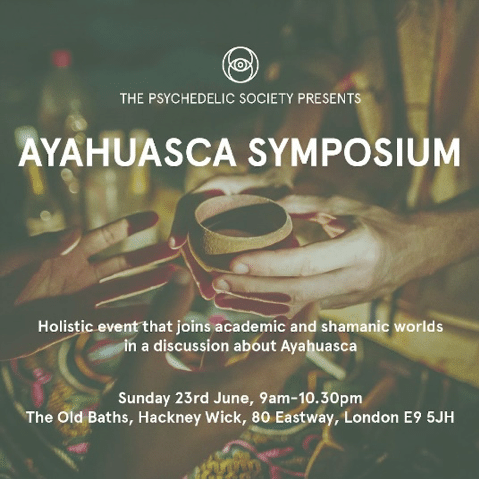 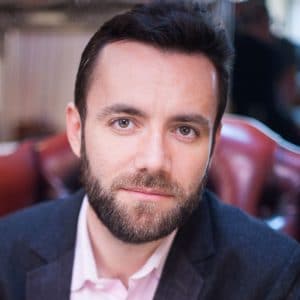 On Sunday, June 23, I attended the first “Ayahuasca Symposium” in London, UK, on behalf of Chacruna, a partner to the event. The event, organized by Anya Oleksiuk of the UK Psychedelic Society and Benjamin Mudge, aimed to integrate academic and spiritual worlds. Talks introduced the sacred Amazonian plant medicine ayahuasca, related contemporary issues, and the community that has emerged around it.

The conference took place on one day in a historic building in Hackney. There were nine speakers providing a range of presentations and information. The day began with music and smudging and ended with a cacao ceremony, more music, and a DJ set. There was an outside space and plenty of time for community connection.

Anya comments, “At a time when ayahuasca ceremonies have become popular, but are still misunderstood and legally-persecuted spiritual practices, the Psychedelic Society intends to provide a balanced approach to the facts, issues, and best practices surrounding this ancient plant-based medicine. Curated by psychedelic luminary Benjamin Mudge, this event welcomes a line-up of internationally reputable speakers and soulful musicians.”

The day began in the outside space with a ceremonial and musical session led by Don Gino Chaka Runa and Silvio Nardo, alongside other musicians and sage smudging. Benjamin Mudge gave a general introduction on the basics of ayahuasca.

Helena Aicher outlined results from the large-scale survey conducted by the Global Ayahuasca Project. This has amassed over 7000 responses so far. Respondents were typically 25 – 35 years old, had drunk 2 – 5 times, and stayed with a single group of drinkers. Top motivations to drink included “Increased spiritual awareness and connection,” “To gain insights into my life, purpose, and emotion,” and “to improve personal relationships.” Very few said “I just wanted to get high.”

Charlotte Walsh, a UK-based lawyer with the ICEERS Ayahuasca Defense Fund, gave a solid outline of the legal situation regarding ayahuasca, particularly in the UK. She detailed the two main court cases that have been brought in UK case law. Walsh critiqued the positions of both prosecution and defense, and problematized the placement of the right to drink ayahuasca within the bounds of religious freedom. Instead, she said it is a much broader issue of human rights, including rights to autonomy and cognitive liberty. Her position is that current drug laws are not just inappropriate, but also incorrectly applied.

Tom John Wolff gave a presentation on ayahuasca tourism in South America. He noted the romanticized fantasies that Westerners often have about ayahuasca, exhibited via preferences for ceremonial headdresses and paraphernalia. There is a “fluid religiosity, neoshamanic beliefs, and a romantic image of ‘Indian’ wisdom.” He noted, “Tradition is not a fixed dogma, unchanged through the centuries, but is formed and shaped by each new generation. Tradition can be produced and re-invented.” Wolff found that foreign visitors tend to be white, well-educated, middle class, and around 30 years old, with previous drug experiences and experience of self-optimizing techniques.

Danny Nemu, author of “Neuroapocalypse” and “Science Revealed,” spoke about Brazilian ayahuasca religions, including Barquinha and the Uniao de Vegetal (UDV), particularly his own tradition of Santo Daime, and also explained some of the background and origins of the beliefs, practices, and rules behind the Daime and its interactions with Christianity. Nemu identified the importance of music and icaros and performed a few of these songs acapella, translating and explaining some of the lyrics. Nemu made connections to Western philosophy in the writings of Nietzsche and the art of William Blake.

Kerry Rowberry, PhD Candidate at the University of Cumbria, reported on ayahuasca ceremonies in the United Kingdom. She used an innovative form of visual ethnography based on the thinking of Deleuze and Guatarri, a “rhizomic analysis,” as opposed to the “tree-like structure” often presumed by other approaches. This involved an online process of data collection using mixtures of words and images generated by participants. Rowberry shared several of the artworks produced by participants and described her interpretation of meanings.

Benjamin Mudge, curator of the event,  spoke on psychotherapeutic and psychiatric uses of ayahuasca. He described a range of contemporary research, including trials using a measured, dose-calibrated, pharmaceutical form of ayahuasca and MRI scans. He described the problems of trying to “blind” trials where ayahuasca is involved, due to the obviousness of its effects. Ayahuasca has been found to be an effective anti-depressant, using traditional scientific scales. Ongoing research is approved at Imperial College London and the Maudesley.

Sophia Vasiliou gave a presentation entitled, “Preparation and integration, before and after ayahuasca ceremony.” She detailed the four stages of information, preparation, navigation & integration. Vasiliou provided advice and guidance for each stage; particularly, for navigation and integration. These are described in greater detail in the two-day workshops and integration retreats that she runs. She discussed common difficulties and steps people can take to overcome them in their encounters with ayahuasca.

Don Gino Chaka Runa talked about “Peruvian Shamanism, and the spiritual journey of the ayahuasca ceremony.” He detailed and compared different traditions in Peru relating to ayahuasca, particularly the Andean traditions. Singing at points, Gino gave an informed background to contemporary ayahuasca use and advised people to seek out elders based in strong traditions. He noted his support for ICEERS and MAPS. He argued for much greater access, combined with proper respect and training. “The genie in the bottle is on the loose, and we don’t have any idea what our three wishes are.”

Charlotte Walsh – The legal status of Ayahuasca, ICEERS and the Ayahuasca Defense Fund.

Sophia Vasiliou – Preparation and integration, before and after ayahuasca ceremony

Psychedelic Science Shies Away from Mysticism Without Losing Its Tenderness