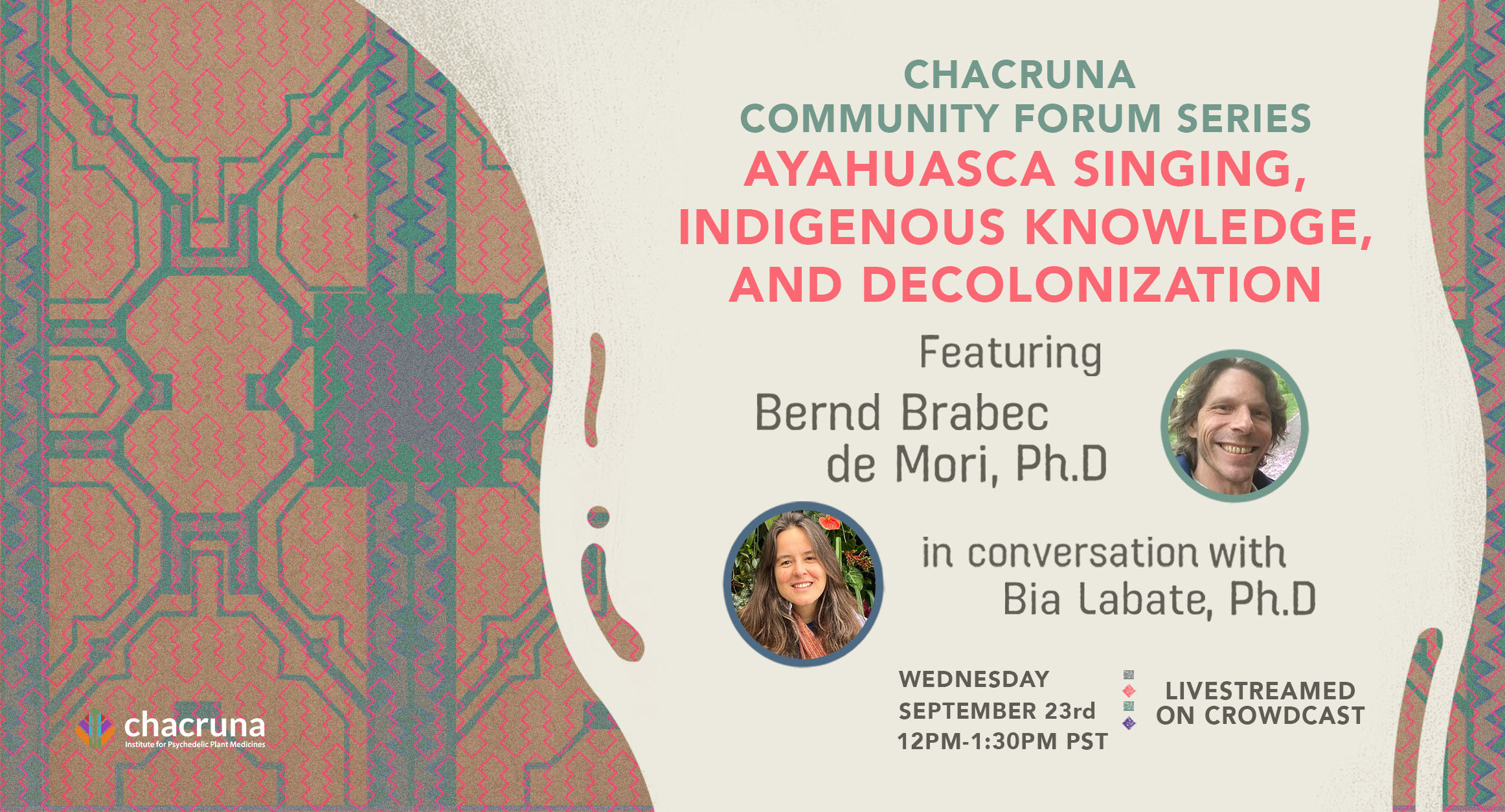 The practice of singing plays an essential role in much of indigenous culture and ceremony. In traditional ayahuasca ceremonies, singing is how the shamans communicate with the spirit of the plants and is intimately related to healing. Traditional medicine communities in the Amazon have recently opened their doors to Western visitors, which has led to significant changes to the traditional culture, promoting positive cultural revitalization processes while also having negative impacts on local communities. All this raises important questions around oppression, colonialism, cultural appropriation.

Some of these issues can also be seen in the ayahuasca singing itself, and how the practice has transformed over the last couple decades. Anthropologist and Ethnomusicologist Dr. Bernd Brabec de Mori studied singing and its meaning among various indigenous groups in the Western Amazon from 1998-2008, including singing in ayahuasca sessions.

In this conversation with Dr. Bia Labate, Bernd will discuss his research into how the focus of ayahuasca singing changed when the focus shifted from treating kinspeople in indigenous villages to providing an experience for visitors and tourists. This transformation reflects the re-interpretation of indigenous knowledge as internal psychological processes, and the Western attribution of indigenous people as pursuing “deep ecological wisdom.”

Bernd Brabec de Mori received his Ph.D in musicology from the University of Vienna. He specialised in indigenous music from the Ucayali valley in Eastern Peru, where he spent five years among the indigenous group Shipibo-Konibo. Since 2006, he has been working at the Phonogrammarchiv of the Austrian Academy of Sciences, Vienna, and later as a research and teaching assistant at the Centre for Systematic Musicology in Graz. He is currently employed as senior scientist at the Institute of Ethnomusicology, University of Music and Performing Arts, Graz. He is the author of “Die Lieder der Richtigen Menschen” (Songs of the Real People, 2015), editor of “The Human and Non-human in Lowland South American Indigenous Music” (2013), and co-editor of “Mundos audibles de América. Cosmologías y prácticas sonoras de los pueblos indígenas” (2015, with Matthias Lewy and Miguel A. García). His publications contribute to the research areas of Western Amazonian indigenous music, arts, and history; to the complex of music, ritual, and altered states; as well as to theories about knowledge, ontology, and aurality/orality.

Dr. Beatriz Caiuby Labate (Bia Labate) is a queer Brazilian anthropologist. She has a Ph.D. in social anthropology from the State University of Campinas (UNICAMP), Brazil. Her main areas of interest are the study of plant medicines, drug policy, shamanism, ritual, and religion. She is Executive Director of the Chacruna Institute for Psychedelic Plant Medicines (https://chacruna.net). She is also Public Education and Culture Specialist at the Multidisciplinary Association for Psychedelic Studies (MAPS), and Adjunct Faculty at the East-West Psychology Program at the California Institute of Integral Studies (CIIS). She is author, co-author, and co-editor of twenty-one books, two special-edition journals, and several peer-reviewed articles (http://bialabate.net).